How to install Flameshot in Linux Mint? [with screenshots] 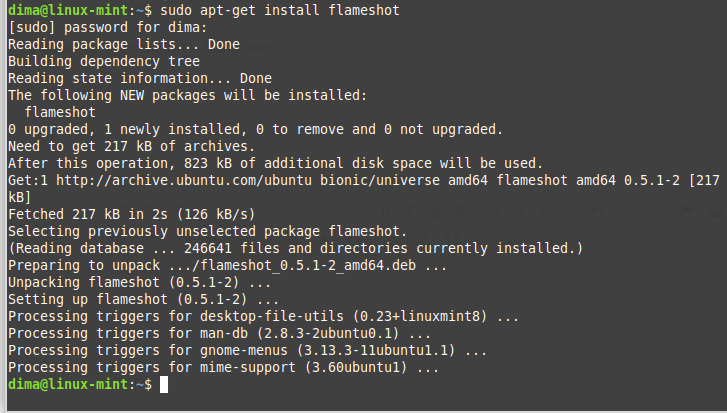 How to find your IP address in Linux Mint?

The simplest and the fastes way to find your IP address in Linux Mint is to run the following command in linux terminal:

But this is an example, how to find your IP address in internal network. In case you are looking for an external IP address (the address you have in internet), you should run a command:

How to find your IP address in Devuan linux?

In standard Devuan Linux installation command nmcli is included, but we have hostname command and can easily use is:

How to install japanese keyboard layout on Elementary OS

In order to install japanese language keyboard layout in Elementary OS, use fcitx, but during installation choose "japanese language" instead of "chinese language". Keep in mind, that under Freya, nor ibus, nor SCIM is working properly.

First, you have to add fcitx repository:

Then update your sources:

After that you can install fcitx and chinese input layout:

How to delay shutdown in Devuan Linux?

Shutdown delay in Devuan Linux is made the same way as shutdown delay in other Linux distros. The only thing you have to do is to run "shutdown" comman with proper parameters. This is very easy. For example this command will delay system shutdown for 20 minutes:

In case you want to delay shutdown for 2 hours, you run:

This is simple thing: just set a number of minutes.

How to plan system shutdown in Devuan linux?

You already know, that to shut down system immediately, you can run a following command in linux terminal:

System will shutdown immediately. Surely, it you want to shutdown and then reboot it, you will run:

But sometimes you have to plan your shutdown (corporate rules, system maintenance, parental control etc). In this case you have just to pospone system shutdown using proper parameters while running "shutdown" command.

How to prevent users log in into the Devuan system and how to postpone system shutdown?

Sometimes you need to lock system and don't let users to log in. One of the solutions is to schedule system shutdown and postpone it with a lock from new logins. It can happen in case you want to upgrade the system, but it's impossible to kick logged users from the system and you want just to let them finish their work and then do you work.

Just imagine you need to postpone shutdown for 20 minutes and let users know that system maintenance is coming. Let's start postponed shutdown with an announcement, what is going to happen:

Explanation of inittab in Devuan

As you know, Devuan is using a little bit different init system (sysvinit), than majority of linux distributions (systemd). It means, that you have a chance to follow system's startup and shutdown processes in detail. Moreover, sysvinit gives you a chance to adjust, modify and configure the way, how processes get started.

First process created in system has PID=1 and runs as a daemon. PID number 1 controls system's startup, shutdown and every changes happening with other proceses.

Let's see, how you Devuan system starts: Bootloader starts kernel, which spawns init, which parses inittab, which starts a service symlinks in the boot runlevel and then in the default operating runlevel.

Inittab is just a file, which describes and sets, which processes start in which runlevel. Let's see on a real example and explain, what means what.

To view an inittab, run a command:

Sometimes we need to create files (actually generate them) for testing purposes or for checking our scripts or programs, working with file size limits. In linux you don't have program any script; bash is good enough to meet your requirements to achieve your goal. I will show you, how to generate files of any size you need in my Solus system (don't be afraid, all examples are working on every GNU/Linux based systems and distributions);

Creating a file of an approximate size

This is the fastest way to generate a file using truncate command:

We aimed to 2M big filesize, but let's see, what is precize filesize of this generated one:

Written by Administrator on Tuesday April 28, 2020

How to install Apache2 server on Linux Lite OS?

If you plan to install one of the most popular server on your system (Apache2), you should start with running a command:

Written by Administrator on Monday April 27, 2020