How to remove (uninstall) Freesweep game in Devuan Linux [with screenshots]

Written by Administrator on Friday May 8, 2020

Freesweep is a game designed especially to play in terminal and is an implemenetation of popular minesweeper game; originally was written in C programming language for Unix-liste systems. Freesweep is installed by default in Devuan Linux and if you are not a fan of this game and don't need it, just remove it from your system by running following command in terminal: 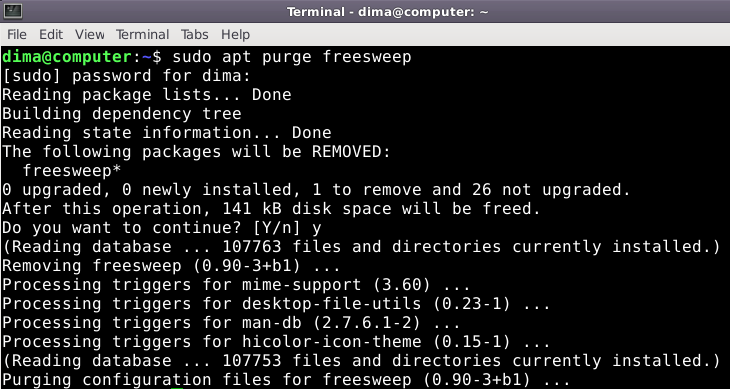 Removing this game from your Devuan Linux OS is not only about freeing 141 kB, but about cleaning your operation system from application you don't need. It will make your menu free of apps you really don't need.

Freeswipe is a console (text-based) game, it means, originally it was aimed to systems and computers with low graphics. Nowadays having installed Devuan Linux on your desktop computer, it's very hard to play games in terminal.

Moreover, it's reported that Freesweep game has is not secure. It's possible to set certain environment variables and then invoke freesweep to execute arbitary code, obtaining 'games' group privileges.